Niels Bohr brought a revolution by making necessary amendments in the Rutherford’s nuclear model and later proposing his own model. His theoretical predictions were authenticated by experimental data too.Let us begin this post by studying the hydrogen atom spectra with reference to the Bohr Model.

Now, using this formula let us try to find energies for different orbits in the hydrogen atom.

Energy for the first orbit i.e the orbit closest to the nucleus, n=1.

We have already studied that when the ground state electron in H-atom is excited by input of energy, it falls back down to the ground state emitting electromagnetic radiation (EMR) of energy.This phenomenon of excitation and falling back of the electrons gives rise to the atomic spectra. We get lines of definite colors i.e definite wavelengths(every color has a definite wavelength,λ.e.g. the red line in H- atom spectra has a λ = 656nm).These lines are unique to an element.Thus, by observing these lines we can find out the element under study.

The line spectra of hydrogen

We have already seen that ,

where the wave number is reciprocal of the wavelength.

The emission spectra of atomic H-atom thus can be  divided into a number of spectral series, with wavelengths given by the above formula.The series are as follows –

How do we know in which region we can find the emissions? Theorotically we can calculate the regions using the Bohr formula and Rydberg equation.

e.g. – For Balmer series, electron falls from n=3 to n=2. We have already calculated energies   for these orbits above. 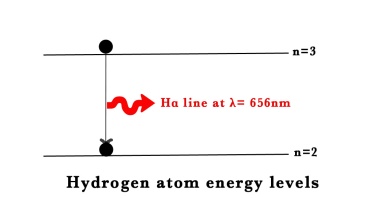 The 4 lines in the Balmer series are named as  Hα ,Hβ,H𝞬 and Hδ lines.

There was still more evidence in support of the Bohr Model.A year later after Bohr model was proposed, James Franck and Gustav Hertz conducted the Franck-Hertz experiment(1914). 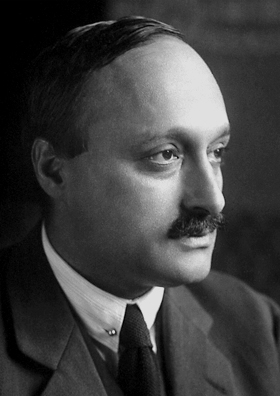 In their experiment, they used a drop of mercury metal(vapour) in a vacuum tube.They introduced two electrodes, cathode and anode in the tube and connected them to a variable voltage source.They also introduced in the circuit an ammeter to measure the electric current.

They studied the variation of current(i) with the changing voltage(v).This is what they observed – 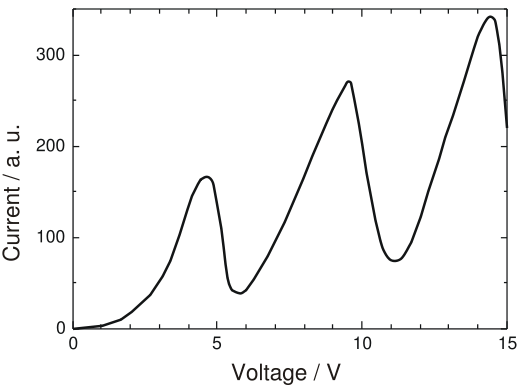 At first they observed that they got low current at low voltage and current increased as they increased the voltage.This was as expected.But as they kept increasing the voltage, at some critical volatge value(4.9V), the current almost dropped to zero and the tube started glowing! At this stage, they again kept increasing the voltage and saw that again the current  showed a rise with the increase in voltage and at another critical point(6.7V) dropped  almost to zero again ! The tube started glowing more brilliantly than before!Thus, this phenomenon showed a periodic behaviour.
The ionisation energy of mercury is 10.4 eV. These values recorded were less than the ionisation energies ! So, they reasoned that electrons in the mercury atom were excited within the atom and and as this happens only at certain discrete values, the energy levels within the atom must be quantised too ! Though at the time of the experiment , both Franck and Hertz had not known about the Bohr Theory, they later adopted this theory as a possible explanation to the phenomenon they saw.Also, in 1915, Bohr  published a paper noting that the measurements of Franck and Hertz were consistent with his own model for atoms. Franck and Hertz’s observed  emission  at 254 nm from the tube. When the calculations were done according to the Rydberg equation and Bohr model concept, the values of λ matched. Thus, this experiment showed that the energy level quantisation concept proposed for an one electron atom was true for multi electron atoms too ! Thus, all atoms have quantised energy levels ! The Franck-Hertz experiment thus became one of the most important experimental pillars of quantum mechanics.On December 10, 1926, Franck and Hertz were awarded the 1925 Nobel prize in Physics “for their discovery of the laws governing the impact of an electron upon an atom.”

Though this theory was a huge step forward it had some limitations. The Limitations of The Bohr model were as follows –

1)This theory could not explain multi-electron systems.

3)Under a magnetic field and in an electric field, the spectral lines exhibit a splitting phenomenon.

Both the above effects could not be explained by the Bohr atomic Model.

So, obviously there was a lot more to be discovered about this small indivisible particle of matter – the atom.What were the further developments? We shall find that out in our next post. Till then,

Be  a pertpetual student of life and keep learning…