In the last post we studied some examples of homocyclic aromatic compounds. What happens if the ring has an atom other than carbon in it? Can these compounds be aromatic too? Let us find that out  in this post.

Every ring above has a hetero atom i.e an atom other than carbon atom. N,O,S all are heteroatoms.

So, the above structures can be represented as –

Let us see why the above structures are aromatic.

If one C- atom of benzene with it’s hydrogen is replaced by a N-atom, it gives pyridine molecule. The structure of pyridine (C5H5N) is –

Nitrogen in pyridine is sp2 hybridized.

The resonance structures of pyridine can be shown as follows – 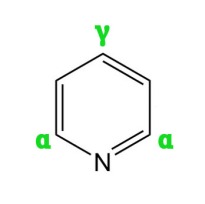 As seen in the above figure, the degeneracy of is Ψ2 , Ψ3 and Ψ4 , Ψ5 lost (benzene had degenerate levels), owing to the distorting effect of the hetero atom, N. The six π electrons are accommodated in three bonding orbitals – Ψ1 ,Ψ2 , Ψ3. Thus, pyridine is aromatic. As it has a lone pair of electron, which is free, it is a base (Base is a species which can donate electrons).Reactions with nucleophiles take place at 2- , 4- and 6- positions. We will study more about the reactions of pyridine when we study heterocyclic compounds.

In the next post we will study some more examples of aromatic heterocyclic compounds. Till then ,