In this post we shall just get an overview of some recently discovered sub atomic particles.It was believed  that the entire universe was made up of atoms and that atoms are in turn made up of electrons, protons and neutrons.With the wave-particle duality and concepts of quantization, it was assumed that we had cracked the code of the universe.However,the universe had many more surprises in store for us.

In the 20th century, while studying the cosmic rays,researchers found many new particles other than the proton,neutron and electron.Cosmic rays are basically particles that bombard the earth from anywhere outside its atmosphere .These particles are a result of various collisions that happen in the outer space.These collisions are huge ,e.g.-Supernova – the final gigantic explosion during destruction of a star.These collisions lead to smashing of the atoms together in a titanic way and produce many high energy radiations.When this high energy radiation reaches the earth, it  sometimes also produces certain secondary particles after reacting with the earth’s atmosphere.Thus,about 80 different particles ,that were unknown to us,were found out during the study of these cosmic rays.So it meant that many new sub atomic particles existed in the universe , which we were still unaware of and that there was much more to an atom than we thought!Thus, began the journey of delving still deeper into an atom.As a result,a whole new science of particle physics came into being.

About 99% of the cosmic rays were found to be nuclei of known elements,stripped off their electrons.The various new particles found in the cosmic rays were a result of huge collisions happening in the universe.So, scientists now were curious to find out more about these sub atomic particles and the only way to do that was to simulate similar conditions(of collisions in outer space) on earth.Thus,were born the ‘ATOM SMASHERS‘ or ‘PARTICLE ACCELERATORS’!!

A]Particle generator – This is a very high voltage device.At such high voltages, it discharges atomic particles or ions, we need to study the atom structure.

B]Vacuum tube -The particles created in the generator are introduced in to a vacuum tube.This tube could be linear or circular.The particles are made to accelerate within this tube with the help of electric fields and the direction of the beam is maintained using magnetic fields.These magnetic fields make sure that the particle beam remains in the centre of the tube and does not touch the electric plates lining the vacuum tube.If an particle hits the electric plate inside the vacuum tube, it gets lost and is of no use further.

C]Detectors – The sub atomic particles get smashed when they collide with each other and produce debris.This debris tells us a lot about the contents of these particles.The detectors detect the debris produce from such collisions.The fragments thus produced are photographed at the rate of 600 million times a second!!!

Large hadron Collider (LHC) at CERN is the world’s largest and most powerful particle collider.It is 27kms in circumference near the France-Switzerland border,Geneva, in Switzerland.

It was known that protons are packed together in the nucleus.But how do all these positive ly charged particles remain together in such a small nucleus? If one thinks about the electrostatic force of repulsion, these should just repel each other thus making the nucleus relatively unstable.However,no such phenomenon is seen.Thus, the scientists concluded that there must be some force greater than the electrostatic force of repulsion which is causing the protons to stick together.They called this force as the’STRONG FORCE‘.

In the 1930s , the phenomenon of β- decay was also known to nuclear physicists.Although, they wondered that if the nucleus was made up of positive and neutral particles, then how does the nucleus emit  negatively charged β-rays? It was soon found out that ,in a radioactive nucleus, a neutron gets converted into an electron and a proton.The proton stays in the nucleus (increasing the atomic number by one) and the electron thus produced comes out as  β-rays. This phenomenon could be explained by introduction of a new force inside that of a nucleus – the ‘WEAK FORCE‘.

Thus, there are 4 fundamental forces in the universe according to particle physics

Many many particles new sub atomic particles were thus discovered and it was essential to correctly categorise those based on their spins,charge etc. The standard model properly arranges the varied particles and  gives us a correct  classification.

We know that the nucleus is made up of protons and neutrons and the electrons orbit around the nucleus.The protons in the nucleus are held together in the nucleus by strong forces. It was later found that the electrons are undivisible. However,the protons and neutrons are made up of 3 quarks each. If a proton has +1 charge then the quarks should have a fractional charge.So, quarks have charges as 1/3rd and 2/3 rd .They combine in various ways to get either zero charge for a neutron or +1 charge for the proton.Quarks were theorized in 1964 by American physicists Murray Gell-Mann and George Zweig.4 years later they were discovered at the Stanford Linear Accelerator Center.

All matter is made up of two elementary particles –

There are 6 types of quarks according to the standard model –

All quarks have the same spin of 1/2 but their mass and charge are different.

Neutrinos are ghost-like, one of the least understood particles as-

It is found in abundance in the sun’s core and in a supernova explosion(when a star dies there is a huge explosion called supernova).

The recent discoveries in the field of particle physics are totally mind boggling.So many new particles are discovered, so many new theories are proposed based on mathematical calculations that it might take more than a lifetime to understand the mystery behind the atom.We have just discussed some very basic concepts here.Personally, I keep thinking of the spiritual teachings, which tell us time and again how inconceivable the universe is.It is so difficult to comprehend the structure of our universe at a logical level.Strangely, Quantum Mechanics bears a striking resemblance to the content of the ancient Indian scriptures like Vedas! Many scientists have accepted that learning  Indian philosophy has helped them to relate to Quantum Mechanics better! 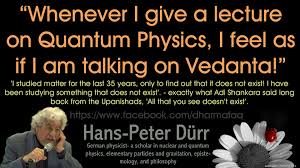 We shall end our discussion of the atomic structure with this post.Next we shall begin a new topic in Chemistry.Till then,