We begin discussing one more important property of elements in this post – The Electron Affinity(EA).

As the name suggests, this parameter talks about how much affinity a species has for electrons.

Electron affinity of an atom /molecule is  the amount of energy released , when an electron is added to each atom of 1 mole of  neutral atom or molecule in the gaseous state, to form 1 mole of negative ions.

(Note – More energy = less stability ,
Less energy = more stability.
To understand this, lets consider an analogy – Imagine a child with huge amounts of energy.This child will never sit down , will always be very active and will just not settle down easily. Whereas a child with slightly low energy will be quieter and more stable).

We already know the octet stability rule , which states that a species gains extra stability if the octet in its valence shell is complete.So, all the electronegative elements( especially non-metals→right side of the periodic table), who are closer to achieving this octet ,will have a strong affinity to gain electrons and achieve more stability.Thus, they have high electron affinity values.

High electron affinity  means that, the amount of energy given off is larger. Numerically, that means that the number becomes more negative.

The use of EA values is mostly always confined to elements in groups 16 and 17 of the periodic table.

A. As the electron affinity value for bromine is more (324 kJ/mol energy would be released if an electron is added to bromine atom to form bromide ion), its tendency to form a negative ion is more than that of chlorine.

e.g.- Chlorine –  1s22s22p63s23px23py23pz1    – just needs one electron to complete octet in the third shell(3s and 3p).It has two 3s +five 3p = 7 electrons in the outermost shell.Gaining one electron will render extra stability to it. So, it has high electron affinity value.

As opposed to this, sodium atom is very reluctant to accept an electron. It prefers to lose the valence electron instead, as that will complete its octet.So, it has low electron affinity value = -52.8 kJ/mol

EA  increases across a period. The non-metals , which are to the left of the periodic table have higher EA values than the metals to the left.The table below gives us the values(approx) of electron affinity for different elements – 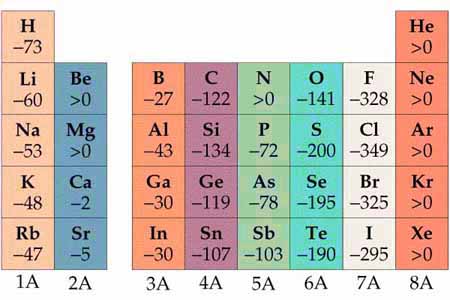 As we can see, values to the left are low than the value to the right side of the table.

Exception 1 – Why do noble gases have positive(EA >0) electron affinities?

It is simply because noble gases already have achieved octet stability and so they absolutely do not want any more electron in their atom.One has to add extra energy (positive value) to forcibly add an electron in noble gas atoms.Also, this extra electron added will occupy a new ,higher energy orbital (as all low energy ones are already filled).This results in increase in energy of the system , which is not favored. Thus, noble gases do not form negative ions.

If you see the table above, you will find that group 15 (or 5A) elements show values less than 4A elements.This is because their general electronic configuration is ns2 np3 . the fourth electron when added to the np shell would result in pairing(according to Hund’s rule of multiplicity).The added coulombic repulsion from electron pairing results in lowering of EA values.

Exception 3 – Why is the EA of fluorine & oxygen less than that of chlorine & sulphur respectively?

Fluorine atom is smaller as compared to other halogens.The second shell (2s and 2p ) is the valence shell.This shell is closer to the nucleus and is shielded only by 1s orbital. Thus, the extra electron that is trying to enter the atom to form fluoride ion has to enter a space(second orbital), which is already cramped with 7 electrons.These 7 electrons are closer to each other as compared to the other larger halogen atoms. So, the electron entering the valence shell of fluorine has to enter an electron dense space .It experiences more repulsion from the other 7 electrons present in the valence shell of the atom.It has to overcome this electron-electron repulsion (energy is spent here).This leads to decrease in the EA values.

A similar explanation can be presented for the anomaly in EA values of oxygen and sulphur.

We study these values only w.r.t group 6 elements ,namely-  oxygen and sulphur .These two elements form O2- and S2- ions respectively.Energy required to to carry the following reaction , per mole ofX–, is second EA value for that element –

The positive sign shows that you have to put in energy to bring about this change. Thus, these changes are energetically unfavored.

The first EA values can be negative,zero or positive.However, the second EA values are always positive.

Be a perpetual student of life and keep learning…