We introduce ourselves to a new concept in this post , which is quiet pertinent to the study of chemical bonds and reactions – Electronegativity . Let us discuss all about this new property , its trends and its use in the study of chemistry.

Electronegativity(EN) is a concept , which describes an atom’s tendency to attract electrons, that it shares with other atoms , towards itself.

This tendency can be explained with a tug of war analogy. In tug of war , if both players have equal strength , the pull from both sides is equal. However, when one player is stronger, he manages to pull the string more towards himself. Similarly, in a bond, a electronegative element manages to pull the electron density shared between two atoms , more towards itself. 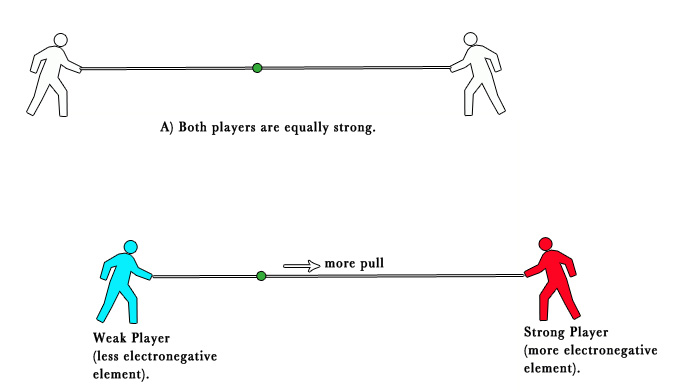 Electronegativity is more of an concept than a property and so it does not have units.

Many attempts were made to quantitatively calculate electronegativity but the most accurate method, which is widely used today, was given by Linus Pauling in 1932.

Linus Pauling is regarded as one of the two great scientists of all times! He is the only person to be awarded two unshared Nobel Prizes!! He was an American chemist, biochemist who worked on varied subjects like developing electronegativity scales for elements , studying DNA structures , developing dietary supplements etc

His paper on electronegativity can be read here –
http://chemteam.info/Chem-History/Pauling-1932/Pauling-electroneg-1932.html

In his book General Chemistry he writes –

“It has been found possible to assign to the elements numbers representing their power of attraction for the electrons in a covalent bond, by means of which the amount of partial ionic character may be estimated.”

Fluorine is the most electronegative element with χ= 4.0 and caesium the least with χ=0.7.

Why do we see this trend ?
As we move down a group, the distance between the bonding pair of electrons and nucleus of the atom decreases.Also, the screening effect is greatly increased.So, the pull is greatly reduced.

Across a period, the nuclear charge(# of protons) increases and size of the atom decreases.So, the nucleus exerts a greater pull on the bonding electron pairs. Thus,EN values increase.

The diagonal increase of EN values is a combination of the above two factors.
e.g.– Consider Be and B .

The electronegativity of some of the important elements cannot be determined by these trends (they lie in the wrong diagonal).Thus, we need to memorize the following order –

Why is Electronegativity values important ?

1)The EN values help us predict whether the bond between two atoms will be ionic, covalent or polar covalent bond.This helps in understanding their reactions and reaction mechanisms.

2) We can find out bond dissociation energies for a bond with minimum error using EN values. Linus Pauling devised an equation to correctly correlate the two entities.

So how does one use the Pauling scale? How to associate bond dissociation energy with electronegativity?

Pauling observed , that the mean of bond dissociation energies(Ed ) of homonuclear molecules i.e H-H and F-F is much smaller than the experimental value of theEd of  the heteronuclear molecule H-F.

The difference in electronegativity between atoms A and B is given by:

e.g.- For H-F molecule, the bond dissociation energy can be calculated, using Pauling equation, as follows –

We know, Ed(H2) ⇒ 436kJ/mol and Ed(F2) ⇒ 159 kJ/mol.
χH= 2.2 and χF= 4.0 (Values obtained from Pauling scale).
After plugging these values in the equation above, we get ,Ed(HF) ⇒ 558kJ/mol.
The experimentally observed value of Ed(HF) ⇒ 565kJ/mol.
So, we can theoretically calculate the dissociation energy value with only 1% error, using Pauling equation!

3)Electronegativity values can be used to approximately predict the degree of ionic/covalent character of a bond in a hetro nuclear molecule.

We shall discuss more periodic trends in the next post.Till then,

Be a perpetual student of life and keep learning …