From this post onwards, we shall start discussing a phenomenon, which manifests itself in many compounds and which is responsible for deviations in structure, properties and reaction mechanisms of organic and inorganic species.

Many a times , it is not possible to define structure of a molecule using just one Lewis structure. There are many contributing structures which together can completely explain the structure of that species.Resonance is the description of these structures and their connection to each other. Thus,

Resonance is the description of the electronic structure of a molecule by means of several schemes of pairing electrons, with features of each scheme contributing in the description.

This observation suggests that, both bonds are similar and show character between single and double bond.This can be shown by drawing two resonating structures for ozone as follows –

Both these structures contribute to the overall structure of ozone ,which can be shown as a hybrid structure , as follows –

Before to proceed to draw resonating structures for molecules , we must know how to calculate formal charges(FC) on atoms in a molecule. Ions either have a positive or negative charge. Neutral species carry zero charge.Knowing which atoms in a polyatomic species carries what charge can help us understand the charge distribution in that species. We know that the valence electrons do not belong to only one atom specifically and these electrons are not always shared equally. The distribution of electrons depends on the electronegativity of atoms in the species. A more electronegative element will pull the electrons more towards itself than a less electronegative element. Calculating formal charges help us to exactly know-

The formula for calculating FC is –

Let us understand this concept with some examples. 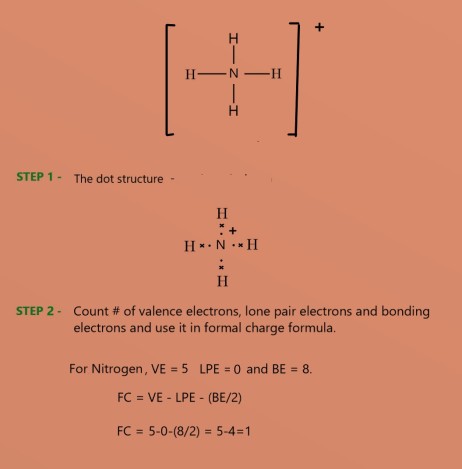 We will continue our discussion on resonance in the next post too. Till then ,